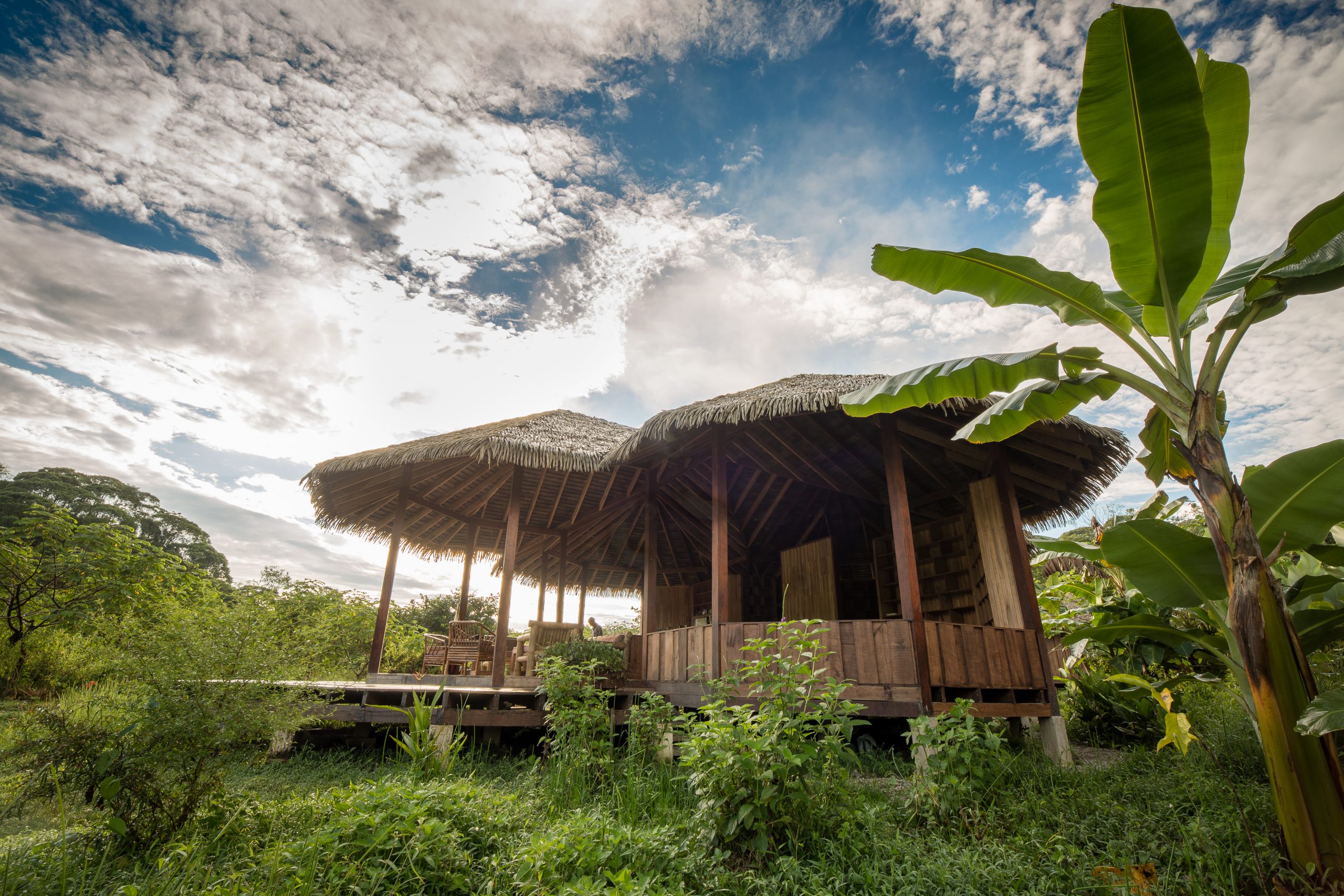 Despite studying natural sciences in Vienna, my professional life did not begin in the field of nature conservation, but in theater design and the fine arts. Decades later, the subtleties of aesthetics and design I learned and practiced all these years came in handy when I designed and constructed the buildings at the Refugio.

The architecture of the Refugio plays a vital role in reintegrating us humans into the cycles of nature. The concept for the buildings was to create multifunctional spaces and to use as much as possible materials that, if not maintained, nature could take back within a short period of time.

Even though we observe a strict ban on cutting trees, we made one exception for good reasons: decades ago, white teak (Gmelina arborea), an invasive tree from Asia, was introduced to Costa Rica because of its usability in construction. However, it soon turned out to have desastrous consequences for the ecology of the country. The roots of white teak are ‘allelopathic’ which means they secrete substances that are toxic to native vegetation and in addition their almond-like fruits cause stomach ailments for toucans and macaws, sometimes even with fatal consequences.

About one hectare within our Refugio was an old plantation of that white teak. We cut down these trees, reforested the area with native trees and recycled the wood into our buildings. The considerable ‘waste wood’ we turned into biochar, which, incorporated into the soil, provides shelter for soil microorganisms that speed up soil recovery significantly.

As our land is a swamp, we could not entirely avoid cement but minimized it to the posts of the foundation. If abandoned, trees still can grow inbetween the posts, and water bodies are not interrupted.

For the roofs we used palmex, a synthetic thatch made from recycled material. We opted for this material because the real palm leaves have been over-harvested to the point that they are now threatened by extinction. Palmex, after it completes its life cycle after about 30 years it can be recycled again.

We achieved the multifunctionality of space through a minimalistic loft-like design with a minimum of walls. The old Chinese system of Feng Shui and Wilhelm Reich’s observations about the influence of geometry (pyramids and cubes) on the human psyche were further guidelines for our design.

Indoors and outdoors are fusing and, last but not least, because of the wildlife we completely abstain from electric light. Artificial light at night interrupts the ‘circadian clock’ of virtually every living being, plants as well as animals. This leads to a cascade of often catastrophic consequences, such as the disruption of night pollination, death of uncountable insects through exhaustion and predation night by night, ceasing of mating behavior in fireflies and many other animals, and much more. Light pollution is still one of the most underrated forms of pollution on earth. As a reward though from abstaining from electric lights, we enjoy better health and are surrounded by many animals that otherwise wouldn’t be around.